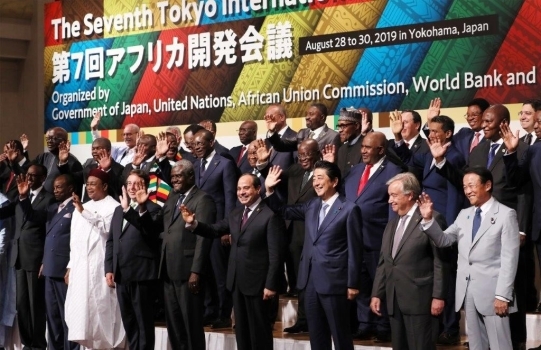 East Asia’s footprints in Africa over the past few decades have significantly evolved from mere diplomatic presence to encompass steadfast multilateral engagements. The growing engagements have been enabled by the two major East Asian countries – Japan and China. Both countries have supported Africa with investments and development aid. Japan, for example, through the Tokyo International Conference on African Development (TICAD), pledged in 2013 and 2016 to commit US$32 billion and US$30 billion, respectively, in both public and private support to Africa. Likewise, China announced during the triennial Forum on China-Africa Cooperation (FOCAC) in 2015 and 2018, US$60 billion in financial packages to support development initiatives across Africa. Scholars and the news media have widely interpreted such hurly-burly commitments as competition for influence in Africa. In other words, a strategic attempt by the two East Asian powers to counter each other’s growing influence in Africa. Such narrowly focused interpretation and analyses has led to little or no discussion on the possibility of a Japan-China cooperation on the continent.

For instance, the conclusion of the seventh edition of TICAD on August 30, 2019, with Tokyo’s pledge of $20 million to Africa and broad commitment to support the acceleration of Africa’s development reignited numerous analytical comparison of Tokyo’s overture to Beijing’s foothold in Africa. Indeed, the summit and its outcome have been widely interpreted as an attempt by Tokyo to counter Beijing’s growing influence in Africa. See, for instance, ‘Japan is Taking on China in Africa’, and ‘Japan Takes on China with a Planned $20 Billion Investment in Africa’, published by the Foreign Policy magazine, and CNN, respectively.

While it may be helpful to evaluate the nature of the competing interests among countries and their strategic approach to Africa to understand the dynamics of foreign influence in Africa, it is worthwhile to also consider the possibility of cooperation in areas of shared interest – regardless of the varying approaches and strategic interests. It appears that no consideration has been given to such insight in the numerous media and expert analyses of Tokyo and Beijing’s Africa policy.

Understandably, Tokyo and Beijing, have historically had a hard time cooperating due to certain unresolved wartime grievances and other differences such as territorial disputes. While these realities appear to make the idea of Japan-China cooperation in Africa unthinkable, the idea of cooperation between Tokyo and Beijing on Africa may be feasible where both parties can mutually commit to overlooking their areas of discord and focus on their shared interest in the African continent. This proposition will serve the mutual interest of both parties, which comes at a time of increasing global cooperation in Africa, and a strong desire by African countries to pursue a more cooperative agenda with external partners and other key development stakeholders.

The Opportunity for Mutual Cooperation

Recent experience of East Asia cooperation efforts indicates that Tokyo and Beijing can cooperate in shared areas of interest when differences are progressively cast aside. Recognizing the need for increased harmony in their Africa policy, Tokyo and Beijing, together with Seoul through their Trilateral Cooperation Summits, have committed to foster dialogue and consultation on African affairs to pursue mutual measures that effectively support Africa’s development priorities. The agreement contained in the Action Plan for promoting cooperation among themselves demonstrates the willingness of the parties to pursue cooperation in shared areas of interest despite the significant differences.

A cursory survey of Tokyo and Beijing’s Africa policies also highlights the importance of Africa in their respective foreign policy objectives, as well as some convergence of interest regarding the need to support Africa’s development priorities. The China African Policy paper published in 2006, for instance, acknowledges the many challenges Africa faces on its road of development and the need for Beijing to support African countries’ endeavor for development and nation-building while enhancing multilateral cooperation in Africa. Similarly, Tokyo, through its flagship TICAD framework, has outlined its development-oriented interest and commitments in Africa. The first TICAD conference in 1993, for instance, acknowledged the development challenges faced by Africa and thus adopted the Tokyo Declaration on African Development as Japan’s roadmap to support and advance the development priorities of Africa – through private sector initiatives, economic reforms, development aids, and international cooperation.

The shared interest and convergence of commitments to Africa consolidate the perspective that opportunities exist to pursue cooperation; hence, the call for complementary policies and cooperation in areas of shared interest.

Consistent with Africa’s development priorities as outlined in the Africa Agenda 2063, peace and security, and climate change has been recognized variously by both Tokyo and Beijing as critical areas of commitment in their respective Africa policy. Consolidating peace and stability in Africa, for instance, has featured repeatedly in Tokyo’s periodic Action Plans and policy documents on Africa, including a specific pledge at the Nairobi Declaration (TICAD VI) to work towards combating insecurity, terrorism, and the threat of piracy in Africa. Likewise, ensuring peace and stability in Africa is critical to Beijing’s African policy agenda and was among the major commitment announced by Beijing at the 2018 FOCAC summit.

Against this backdrop, Tokyo and Beijing can leverage their shared interest in Africa’s peace and security to devise a mutual security engagement with Africa principally aimed at developing the security capacity of African countries. Fortunately, both countries maintain a military base in Africa located in the same enclave of Djibouti. Resources can thus be aggregated to support the development and implementation of effective security measures in the African continent.

Japan and China, in lay terms, weigh heavily on Africa’s future development agenda. Therefore, antagonizing their policies in Africa rather than the possibility of cooperation on shared areas of interest are not only detrimental to Africa’s development priorities but blind to the far-reaching opportunities that such collaboration will avail to the continent. Analyses of Japan and China in Africa should thus move away from conversations on Tokyo and Beijing’s plans to overreach each other’s influence in Africa to available opportunities for the two countries to leverage their mutual interest in the development priorities of Africa to pursue a cooperative agenda.

Cooperation in areas of mutual interest has the potential to support Africa’s development priorities efficiently – a goal to which both Tokyo and Beijing claim endearment in their respective Africa policy. Critically, cooperation can significantly douse or ameliorate growing societal skepticism regarding the scramble for Africa by external powers. Given the broad economic and political consequences of potential (external) collaboration in Africa, it will be crucial, however, to ensure that the prevailing interest of Africa remains at the center of such engagements.