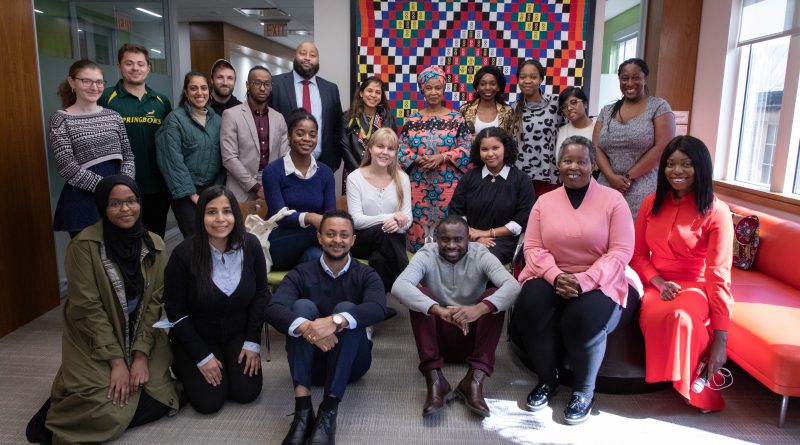 Dr. Phumzile Mlambo-Ngcuka spoke on a range of issues, from expanding women’s civil and political participation, to her experiences while leading UN Women.

“You need to think and see how gender issues are integrated into your studies. Gender neutral policies are discriminatory. Raise these issues in class, at the individual level, make that decision. It is bad corporate governance to be a sexist policy maker,” Dr. Mlambo-Ngcuka told the room of students spanning from different Harvard schools.

She spoke of the importance of engaging men in conversations, and actions, around gender based violence and gender equality. “There is definitely increase in the men who are speaking against gender discrimination issues. We are targeting men in power to speak against these issues, we also work with boys and children and engage them together,” she said.

She urged those in attendance, especially the students in the room, not to forsake the world of politics, after they were done at Harvard. “You have to go into politics. You cannot leave politics to the worst people. The more you move away from politics, the more you leave it for people who are not qualified. We want thinkers and people who care about people at politics,” she said.

Dr. Mlambo-Ngcuka is the Former Executive Director of UN Women, and former Deputy President of South Africa. She is the founder of Umlambo Foundation, a Gender Activist and a Campaigner for Universal Access to Education. She has devoted her career to issues of human rights, equality and social justice. Dr. Mlambo-Ngcuka has worked in government, private sector and civil society and was actively involved in the struggle to end apartheid in her home country of South Africa.

She is currently a Hauser Fellow at Harvard’s Center for Public Leadership.

For more photos from the #APJFiresideChat, check out the Harvard Center for Public Leadership Flickr page: https://flic.kr/s/aHBqjzHM6w