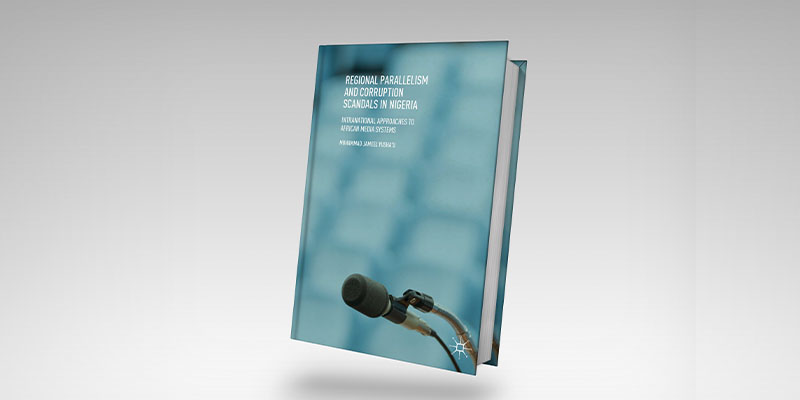 Regional Parallelism and Corruption Scandals in Nigeria is a seminal book for the study of African media systems as a function of nationalism, post-independence nation building and regional parallelism.  The latter concept is defined as “the influence of regional and ethnic considerations in the practice of journalism” (pg. 224). As an accomplished academic, journalist, and public relations practitioner, Dr. Muhammad Jameel Yusha’u proposes a methodology that reflects the depth of research and knowledge that could only be gained through years of rich and diverse professional experiences. It is a joy that he has chosen to share his unique thought-leadership in such an eloquent way.

In a world that is increasingly calling for the decolonialization of academia, this book answers the call, and provides an Africa-centric framework for the comparison of media systems.  This work builds upon the conventional “Four Theories of The Press”, and specifically proposes that African media studies be analyzed through these three lenses: “1) The emergence of nationalist press and the search for political independence, 2) The development of regional/ethnic media to enhance post-independence competition among the regions and 3) Regional parallelism and clientelism.” (pg. 24-25).

Yusha’u goes to great lengths to make the content of this book accessible to both the scholar and the layman.  He begins the book by providing detailed background information to set the stage for his analysis.  In Chapter 1, Yusha’u provides a brief history of Nigeria and its political culture; defines corruption, corruption scandals, and investigative journalism; and presents an overview of established historical research and his proposed methodology for analyzing media systems in Africa.

But what adds even more depth and strength to the author’s analysis, is the transnational comparisons he makes of media systems in South Africa and Kenya.  Yusha’u dedicates Chapter 4 to scrutinizing the historical landscape of the apartheid and post-apartheid press, denoting the stark division between the white and black media in South Africa. Yusha’u ultimately suggests that the factors that have influenced the South African press including “apartheid, political independence, and commercial and profit interest of the media” (pg.94) is distinctively complex and cannot fit easily into any of the models suggested in media systems theory.  Acknowledging South Africa as an enigma within the proposed framework, creates license for the audience to focus on other Sub-Saharan African countries that are testament to the model.

In examining post-independence Kenya, a one-party authoritarian state, Yusha’u highlights that “the news media was an instrument of socio-economic development” (pg. 107), a departure from Western media system models that were critical of governments. After transition to multiparty elections in the early 1990s, there was a deregulating of broadcasting that gave more freedom to the press.  With this new freedom, came a huge responsibility, and the “real test for the media and Kenya as a society was during the 2007 elections” (pg. 114). A significant portion of the Chapter 5 is dedicated to the role of the media in the controversial 2007 Kenyan elections. The author observes that there are several elements of the media system that fit into the three models identified. For instance, Kenya, like Nigeria, operates with regional parallelism. The author concludes this chapter by suggesting that further transnational research be done to determine the media systems that exist across the continent.

Beyond pre- and post-colonial use of media, this book is relevant to understanding more recent scandals involving African leaders and governments in the past decade.  From the presidential elections in Guinea and Uganda to the police brutality protests in Nigeria and other parts of Sub-Saharan Africa. Transparency International noted that only 8 out of 49 African countries scored more than 43 (out of a total of 100) on the corruption index in 2018. Yusha’u aims to advance research “that will explore the nature of (corruption) scandals and develop a framework that will contribute towards guiding further research in scandal reporting” (pg.3).

Overall, this book is a bold attempt at addressing the freedom and independence of the press in Africa, with a particular focus on Nigeria, a country that is often labeled as corrupt by local and international media alike. One critique, and possibly an area to expound upon in the next edition of this book, is the need to address how the increased use of social media affects news reporting in Africa.  The recent #EndSARS protests in Nigeria have set precedent for how social media can be leveraged to mobilize civic engagement.  #EndSARS and other protest movements across Sub-Saharan Africa have revealed the need for an independent media now more than ever. The constant attempt to silence the press and social media users by governments should be acknowledged and examined by the author. While such considerations may make the task of analyzing traditional media systems more complex, social media has become a critical component of the African media systems that cannot be ignored, and its impact cannot be overemphasized.  All-in-all, this was book was an incredible read and should be mandatory reading for anyone studying African media systems, reporting African news stories, or working for African media houses.