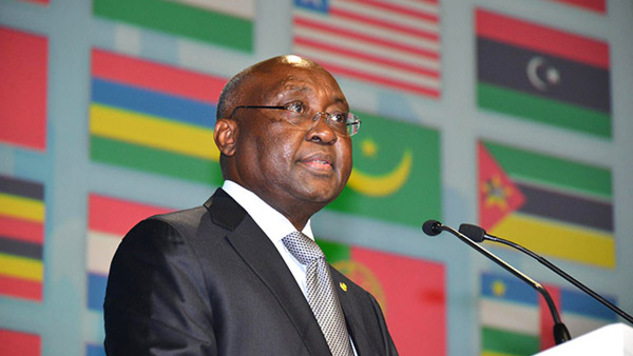 There are more refugees in the world today than ever before, according to the Office of the U.N. High Commissioner for Refugees. The UN figures show that roughly 60 million people were forcibly displaced in 2014.

The UN report says the number of individuals forced to leave their homes due to conflict and persecution increased four-fold in four years to an average of 42,500 individuals per day in 2014. While news reports have highlighted the more than half a million migrants and refugees that have arrived in Europe this year, the refugee crisis is global.

Donald Kaberuka, the former president of the African Development Bank, sat down with the Africa Policy Journal in October to talk about what leadership steps need to occur and why it’s vital leaders don’t confuse refugees with migrants.

Mr. Kaberuka is currently a Hauser Leader-in-Residence at the Harvard Kennedy School Center for Public Leadership. Prior to his decade-long tenure at the AfDB, Mr. Kaberuka was Rwanda’s Finance Minister from 1997-2005, reconstructing the economy after the end of its civil war.

Mr. Kaberuka: The first thing I want to say is that, I think it was Professor Niall Ferguson who was saying, we now have the most acute refugee crisis since 1950. And we clearly need to go to the roots rather than the symptoms, which are desperate people looking for security.

The world needs to focus on refugees everywhere, not just those on the shores of Europe. There are many countries that are hosting refugees far beyond their means. All countries in the world need to work together to try and find a solution at the root of the crisis but also one that is a human solution to this.

The second point is that people confuse refugees and migrants. It’s an unnecessary confusion. Once you call refugees migrants it’s almost like saying we don’t have to help because you’re only looking for economic opportunities. The question of the migrant is totally different, which has to be handled in another context. Within the continent of Africa we fully understand that the solution to the issues of migrants revolves around providing economic opportunities for our people.

But refugees are something totally different. People running away from Somalia in rickety boats looking for safety is a totally different thing. I get a feeling that by confusing refugees and migrants we are diminishing our responsibility to the former. I hope we can all find a solution together both for the root causes and the humanitarian component and strengthen the cooperation mechanisms worldwide, which have become weaker over years.

The region of Africa has been hospitable to refugees for many, many years. Whether it is in the Great Lakes, the Horn of Africa or around the Central African Republic. In all these flashpoints the immediate effect is massive refugees moving across borders. Many countries in Africa have opened their borders to refugees with very little means except with the help of the United Nations and other organizations. I think African organizations can be proud of what they’ve done in terms of coping with massive flows of refugees, sometimes for years and not just months.

The solution internally is to try and strengthen governance and stability, all those things that make it unnecessary to make people cross borders to neighboring countries. I’m referring for example now to the crisis in Burundi, which is completely unnecessary. Refugees have crossed the borders into Tanzania, Rwanda and other places. These countries have opened up their borders.

We now have more refugees at anytime since 1945 but it’s not simply in Europe, it’s around the globe. There’s now too much focus on the issue of Europe and the refugees. I think we need to focus on refugees everywhere to look at the root causes but also to look at how to provide support for these people who are fleeing for their lives. In the long term, the solution is in the stabilization of the Middle East, and the Horn of Africa and part of the Sahel region. If we look at international support, it’s really been lukewarm for the stabilization of Somalia. The neighboring countries have been on their own for a long time.

We should agree stabilization of those countries, who are generating refugees, is a primary form of action. People never like to flee their countries, even when they are really poor. So I think stabilization of those regions is something that requires international cooperation. Those that cross borders looking for safety, that should be the roll of every leader to find a solution.

Q: How should leadership address the number of refugees today?

When piracy became a serious menace to commerce in the Gulf of Aden and the Indian Ocean the global community mobilized with significant resources. Just imagine that you are treating a symptom but not the cause. Suppose that kind of cooperation was evident in dealing with issues on land in Somalia instead of in the sea? The pirates were a result of a failure of the state. The kind of galvanization we saw during the piracy crisis, one hopes we would have seen the same in helping the African Union stabilize Somalia. It’s been lukewarm and a lot more can be done.

Q: What damage occurs when we confuse migrants and refugees?

Refugee and migrant—the two words have different meanings. Mixing the two words is causing a lot of harm. Refugees are people forced to flee their country for safety. Migrants are people who choose to leave their country for better economic opportunities. The confusion between the two is damaging and diminishing the responsibility of countries that should do more. Once labeling someone a migrant, countries can opt out of international conventions and keep people out.

Q: Shifting from the conversation around refugees, how should Africa address migration

Africa is producing fewer refugees now than it has in the past. Overall there are fewer African refugees than in the past three decades. It’s part of the ongoing good governance in Africa over the last 25 years. Countries are at different places on the ladder but have been improving from year to year overall. We are beginning to see a phenomenon, which I believe is very positive. The return of people to Africa to help develop their countries. This movement has accelerated in the last 10 years.