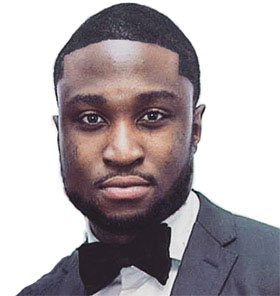 As our most recent edition of the APJ went to print, we received the tragic news that a member of our team, Peter Ngozi Nwaneri, had passed away unexpectedly at the age of 30. This left our entire team in terrible shock as some of us had met with Ngozi earlier on the day he passed. Our thoughts and prayers are with his family and friends. Ngozi served as the APJ’s Interview Editor though he went above and beyond his mandate of preparing questions for visiting officials and stakeholders. Ngozi was passionate, full of life, and incredibly well traveled for his age.

Ngozi was an MPA student at the Harvard Kennedy School who was expected to graduate in May of 2018. He enjoyed photography, video games, and football in his free time. After obtaining his Bachelors Degree from the University of Maryland, College Park, he worked on Wall Street in both London and New York City focusing on private equity in emerging markets where he learned to love finance. He eventually went on to found his own firm to focus specifically on Africa-facing transactions.  Ngozi then attended The Wharton School of Business at the University of Pennsylvania for two years obtaining an Masters in Business Administration; during which time he was successful in implementing projects designed to stimulate economic growth on the Continent.

Ngozi’s work with the Africa Policy Journal was invaluable, and his impact will be lasting. He was the catalyst, engine, and passion behind the APJ’s podcasts, providing art, audio editing, and equipment to the APJ@HKS interview series. He also lead our social media efforts, curating and synchronozing a message across several mediums. He was passionate about making sure that African stories have a platform to be told and fought tirelessly to find an audience who would listen. We were all better and more focused on our goals for the journal just by watching Ngozi’s example. As a staff we grew having watched the time and effort he put into his work, and the quality that resulted from it.

An anecdote of Ngozi’s work ethic was his reaction to hearing that we had secured several high-ranking interviews after presenting his work to the Center for African Studies. When asked if he was excited at the prospect of interviewing African Presidents, Ngozi said that he would rather be behind the camera filming it than asking the questions because he would want make sure that the shot was perfect. We can all learn from the selflessness and dedication Ngozi exhibited daily. He was an incredibly valuable asset to the APJ and to the larger Harvard and Wharton communities and there is little doubt that his effect on the African continent and wider world would have been tangible.

We send our  deepest condolences to his family, friends, and relations. We will never forget him, and shall be inspired by the rich, passionate, and driven life that he lived every day.