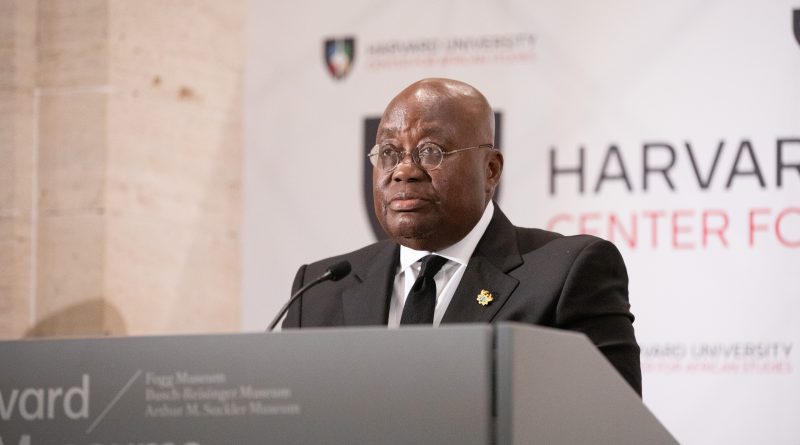 Ameze Belo-Osagie: Today, we have the honor of sitting with His Excellency, President Nana Akufo-Addo on his birthday. Happy birthday, Mr. President!  My name is Ameze Belo-Osagie, and I’m an interview editor for the Africa Policy Journal at the Harvard Kennedy School.

Ameze Belo-Osagie: Today we’re going to be asking you a set of questions focused partly on the political situation in Ghana and your time as president so far, and partly also on economic and market reforms you’re trying to make in our country. Traditionally, there’s been a large disparity in terms of wealth, and in terms of human development indicators between Northern and Southern Ghana. What is your administration doing to address this?

Nana Akufo-Addo: One, at the level of education, and two, the economic measures that are being taken. At the level of education, we’ve brought in, famous in Ghana, about free senior high schools, which is essentially to broaden access across the country to secondary students within in the public sector. It’s important that that is stated this way, within the public sector. And it has meant a significant increase across the country in the number of people going to school beyond junior high school.

Previously, there’s been issues of cost. And we’re addressing that by taking the burden on the state to provide the means. And a significant number of the increases are coming from the northern end. We’re looking at intensifying the empowerment and the enhancement of the education as an obvious way to try to bridge the gap. The second is also to look at the structural issues to do with the economies of the north. They’re essentially agrarian farming communities who have not being able to farm all year round, because of dependency on rain fed agriculture; no irrigation, no other means of water other than during the rainy season. So when we’re choosing the policy, we chose one for each one time, whereby we’re constructing all across the country, especially in the three northern regions.

[We’re hoping to build]dams, small dams invested in all communities across the north to facilitate all year round farming. And you can imagine the impact that that has on the farming income immediately because if somebody is able to farm all year round, obviously they’ll have a far more money than when they just farm three, four or five months a year.

And then the[re’s the] program  Planting for Food and Jobs, which is the main pivot of our agricultural policy, whereby, in the first year, 200,000; in the second year, 6000,000; and this year, a million farmers under a program led by the subsidized fertilizer, improve seeds and also the extension services to help them plant and to develop their farms. And it is also meant a significant increase, both in productivity, of course, necessary, also in output. And that is also in agriculture, you see, to try to bridge this north-south gap.

Beyond that, and I think really at the end of the day, it’s going to be the game changer, the industrial materials, raw materials that exist in the north, [that] have never been exploited, are now going to be exploited. There are significant oil deposits in the northeastern part of the country. Yes, the northeast part of the country has significant amount deposits of iron ore, and they’ve also got a lot of manganese. And it’s now the intention probably the setup a public owned company, Ghana Oil Steel Corporation, to take advantage of the exploitation of these mineral source.

So all of these things, both the industrial and the agricultural reforms and initiatives we’re taking, if you put that side by side also with a greater access to education that is now in place, we can see that in a decade a significant amount of the disparities between north and south lifestyle will disappear. And then we’ll have like a uniformed Ghana.

Memme  Onwudiwe: Thank you so much for that answer. Ghana recently concluded the Sino hydro deal, where in the country would receive $2 billion for infrastructure and in return, give the Chinese entity refined bauxite materials. I was wondering how this fits in with your government’s policy of Ghana beyond aid. Where does this deal fit within that?

Nana Akufo-Addo: Well, it fits very well, because what we’re determined to do initially, the agreement was for bauxite, for raw materials against the infrastructure assistance. When I came in, I said no, the days went by, and raw materials go out. From now on, consistently, consistently, we’re going to have a policy whereby the export is a value-added product. So we change the agreement, in the sense that the Chinese will take the aluminum– when you talk about [the exchange] you talk about aluminum and aluminum product as a payment for the facility and assistance on the infrastructure. And it is meant that within the deal, there’s a moratorium also three years before payments start [.] And in those three years, we’re required to set off the entire infrastructure for exploiting the bauxite and giving it, the exploitation, the entire value chain. So then we’re talking about establishing a refinery for alumina, moving from there to a refinery for aluminum. So that’s the deal that is being made there, and it’s very much a part of the Ghana-beyond-aid [policy] because it’s a necessity on Ghanaian production, and not Ghanaian purchases of people’s products. And we see that as central to the whole program, Ghana Beyond Aid.

Ameze Belo-Osagii: I want to turn now to a concern that I think many Ghanaians have, which is the continued viability of freedom of the press and the risk of vigilantism. In particular, I’m thinking about the recent murder of the journalist, Ahmed Hussein-Suale. Can you comment on the investigation into his death and what steps your administration is taking?

Nana Akufo-Addo: It’s ongoing. We’re determined to find the people who are responsible. Last week, when I asked, I got an optimistic response from the senior police people. We’re getting the impression they’re almost there, but they’re getting maximum support from the government. I was the attorney general who repealed the criminal libel law, which for generations has been used to silence [political dissent] and I did so because I believe that a free media is an indispensable part of the progress of any nation. So it would be very [unexpected and inappropriate] in my period of being chief magistrate of the country, that press freedom became an issue. And it’s not an issue, we will find the killers of the journalists, and who will be put before trial. And if we have caught the hands of the right people, they will be dealt with according to law.

Vigilantism is a major problem for the society. Vigilantism has grown up because of past delinquencies in enforcement of law, because there is a no clear national consensus for doing something about it. So I told the parliament a month ago that very soon I’ll bring a law before them specifically targeting vigilante activity. And hopefully, before [further issues] arise, that law will be before them. If not, immediately, by the time we come back it will be ready, and then the question of its enforcement. I believe if the law is there, avoiding it, and avoiding its enforcement becomes more difficult, than if it wasn’t there. So we want first of all to develop the legal framework, and then move on.

There are other measures that are being taken to deal with the phenomenon, as you remember advocated for [by] all parties, this discussion is between the two main parties, who are generally held in this area as being responsible for the growth of vigilantes and vigilante groups in Ghana. They should sit down and talk with themselves so then find a common ground as to ways to disband them. There are talks after one or two hiccups, I think by large are moving towards some kind of conclusion, at least in the beginning. And side by side with the law-making process, hopefully, we’ll get a meeting of the minds and of morals that will bring vigilantism in Ghana under control. It’s dangerous and I recognize it as such.

Ameze Belo-Osagie: And as a follow up, speaking of your time as attorney general, many countries find that they struggle to have really muscular enforcement of anti-corruption laws because there are ministries of justice that don’t have the resources that they need to conduct complex investigations, particularly into money laundering and transnational financial crime. What are you doing to support the Ghanaian Ministry of Justice in these efforts?

Nana Akufo-Addo: It’s happening already. First of all, there are one or two well-known foreign consultants, if you like, [that] have been brought in the system to help. But there’s lots of internal reforms that are taking place to enhance the capacity of people to undertake this kind of investigation. As you said quite rightly, they are not simple. So we’re trying to develop that capability. And the sooner we can get that, the better for us. But it has not been easy so far.

We’ve had some assistance and that assistance is beginning to yield some dividends. So that’s the way we have to go. Unfortunately, critical state institutions in a country like Ghana, are not as strong as they should be. The law enforcement agencies are part of that. The Ministry of Justice is supporting criminal agencies, all [of which] have limited capacity. And we have to make it possible [to provide]more and more money for them, like they’ve never seen before. When you’re beginning from a very low level, that doesn’t necessarily mean it’s as adequate as it should be but that’s [a start]

Memme Onwudiwe: Your Excellency, thank you so much for your time today. We really appreciate it.

This interview was originally conducted on Saturday, March 30, 2019.

Disclaimer: This publication is a script of an audio interview, and it is lightly edited for clarity purposes. 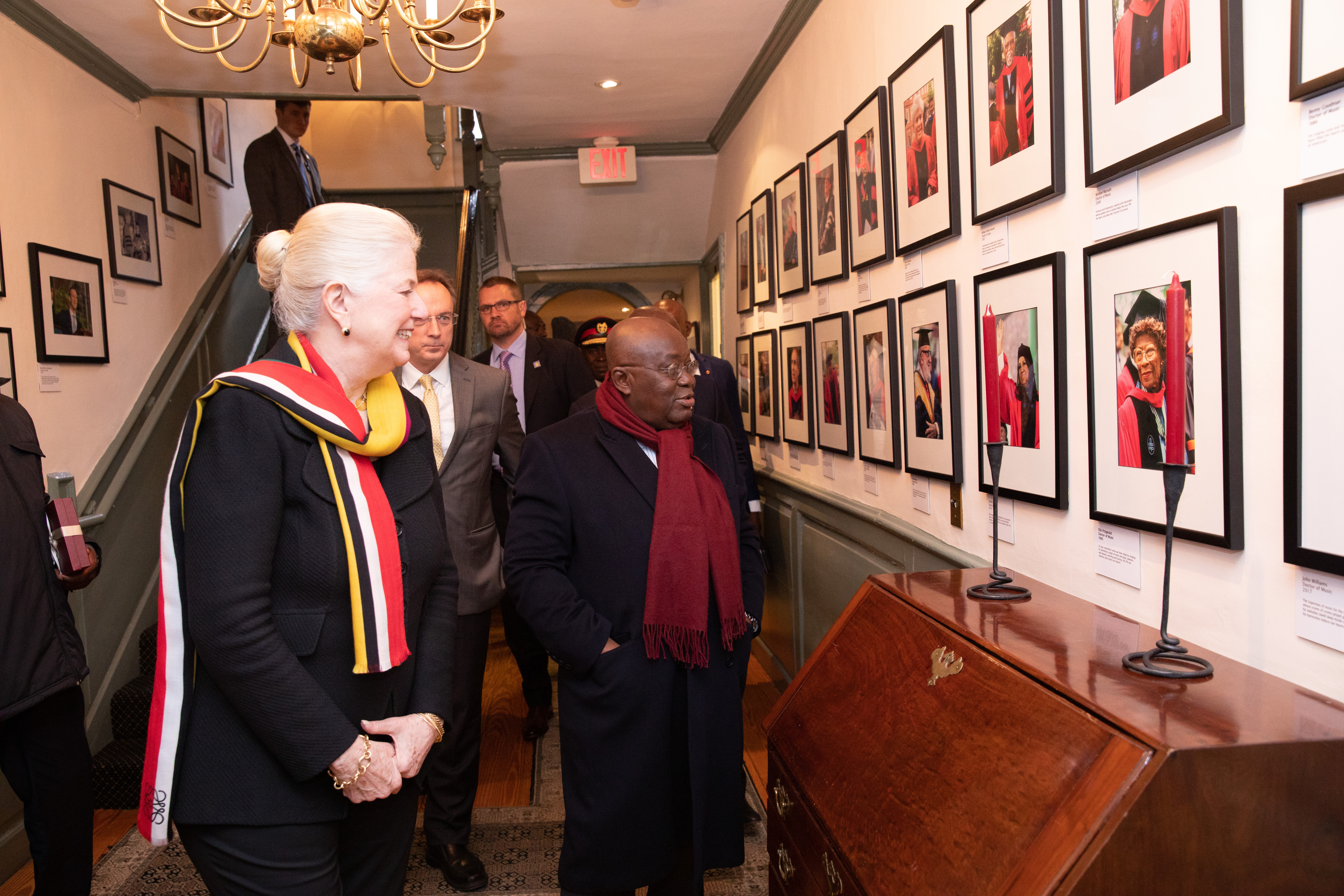