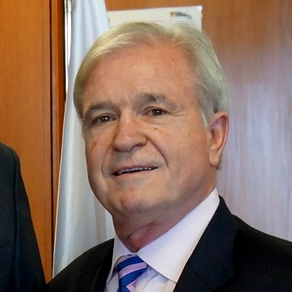 The APJ sat with Dr. Mima Nedelcovych for an interview during his visit for the 2019 Africa Business Conference. He is the Founder and CEO of AfricaGlobal Partners and was recently named President Emeritus and Senior Advisor of the Initiative for Global Development (IGD). Prior to taking up his position at IGD, he was a Partner at the Schaffer Global Group (SGG) and was the lead Partner in the establishment of the Markala Sugar Project in Mali, serving as the Chairman of the Société Sucrière de Markala. Dr. Nedelcovych served in the Administration of President George Bush from 1989 to 1993 as the U.S. Executive Director to the African Development Bank (AfDB) in Abidjan, Cote d’Ivoire. At the beginning of his career he served in the US Government as Peace Corps Country Director in Gabon, as Special Assistant to the Assistant Administrator for Africa at USAID, and as Special Projects Officer at the US Trade and Development Agency. Dr. Nedelcovych is on the Board of Directors of the Niger Delta Partnership Initiative (NDPI) and is a Founder and former Board Director of the Corporate Council on Africa as well as a Member of the inaugural US EXIM Bank’s Sub-Saharan Africa Advisory Committee. Listen below: