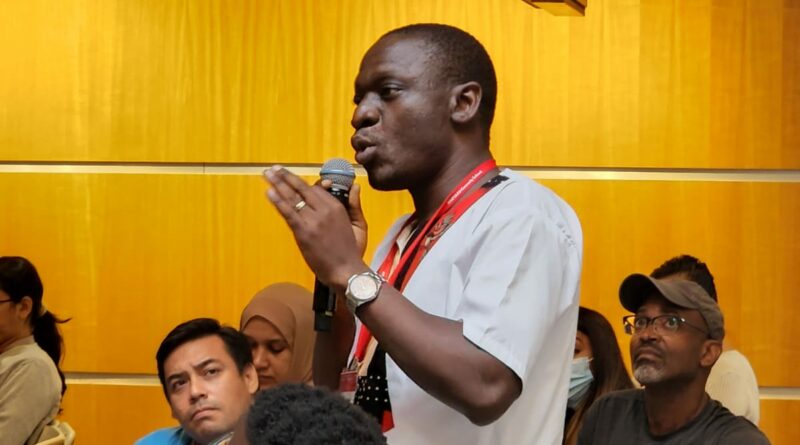 Blog Op-Eds
August 25, 2022August 25, 2022 colonialism, Covid-19, George Floyd, racism
Velaphi Mamba
Velaphi Mamba is a Mid-Career Masters in Public Administration Candidate at the Harvard John F. Kennedy School of Government. He is a human rights advocate, economic and social justice campaigner and development expert. His passion is in education and social policy more broadly, democratization and leadership. He holds an MA in Development Studies from the University of the Free State.

“I can’t breathe,” said a dying 46-year-old George Floyd as a white Minneapolis police officer, Derek Chauvin, pressed his knee on his neck for nine and a half minutes until he died. It was a murder that shook the entire world, sparking global outrage and spotlighting the insidious spectre of racism in modern America.

Over the past four weeks, I sat in, listened to, and engaged in deep conversation on the subject of “Race, racism and colonialism in the making of the modern world” as part of my classes during the summer program at the Harvard John F. Kennedy School of Government. The discussions elicited deep emotions as personal and soul-wrecking stories were shared, history analysed, and the injustices of racism and colonialism intellectually engaged. I saw many in the cohort, the Class of 2023, either crying in the lecture room or hastily leaving in anger, pain or frustration as the conversations hit raw nerves – discussions meant to spotlight the pervasive and persistent character of racism and the historical, socio-economic, political, and religious power structures and systems that undergird anchor, and perpetuate it.

It was a powerful reminder of just how pervasive and strong the currents of racism are and the need to understand that black lives matter!

Indeed, we lack no examples of the pervasiveness of racism in the world today. We have watched in dismay as the rise of white supremacists and racists are euphemistically called “the rise of the right-wing” by the global media without calling it for what it is, thus promoting a public narrative that fails to help us address the real problem.

We watched and witnessed the inequality in the distribution of COVID19 vaccines. We have witnessed many examples of other “George Floyds”, where Black people have been killed, excluded, and denied access to opportunities because of the colour of their skin all over the world today. The obtaining situation represents a global tragedy with racism firmly embedded in the fabric of national, regional, and international institutions.

It is my opinion that while racism is clearly a global emergency, there does not appear to be an equal measure of recognition at the policy level sub-nationally and globally to prioritise and deal with it as an existential threat. The debates, discussions, and conversations on racism have all tended to fall short of a critical dimension: accountability. It is from here that I propose that we must work towards the idea of achieving Net Zero Racism. I believe that the world needs a new global compass – a framework for urgent action to eradicate racism in all its manifestations in countries, communities, workplaces, schools, public institutions, businesses, and all facets of human life.

Net Zero Racism means a condition of the total absence of and zero tolerance of racism in the world through the application of accountability mechanisms and social re-engineering practices aimed at its full eradication. Just as the world must urgently de-carbonise, so must it also urgently de-racialise.

Through Net Zero Racism, I call upon the world to urgently adopt an ambitious time-bound target to end racism for a more just and inclusive world. The world must adopt an integrated framework that considers and compensates for the historical injustices of slavery, colonialism, and the brutal extractivism that has characterised not only race relations but also global affairs. Resources must be urgently mobilised to achieve Net Zero Racism, including an expansion of the tools required to track and measure its progress such as the Global Racism Index. The education system and the school must be focal centres of re-imagining a society devoid of racism in all its manifestations and all aspects of existence should be re-engineered for a Net Zero Racism future.

To achieve this goal, we must be as ambitious as we are with the climate change agenda. I argue that the world must set the bar high and begin to act decisively against racism. This will include learning from the mistakes of the 2001 World Conference against Racism (WCAR) and subsequent conferences under the auspices of the United Nations but also being brave enough to address the urgent and legitimate concerns that will push the Net Zero Racism agenda forward – an agenda that can no longer be ignored nor postponed. The ongoing boycott of the global conference on racism largely by Western countries should be revisited – the world must look itself in the mirror and say: Net Zero Racism is possible!