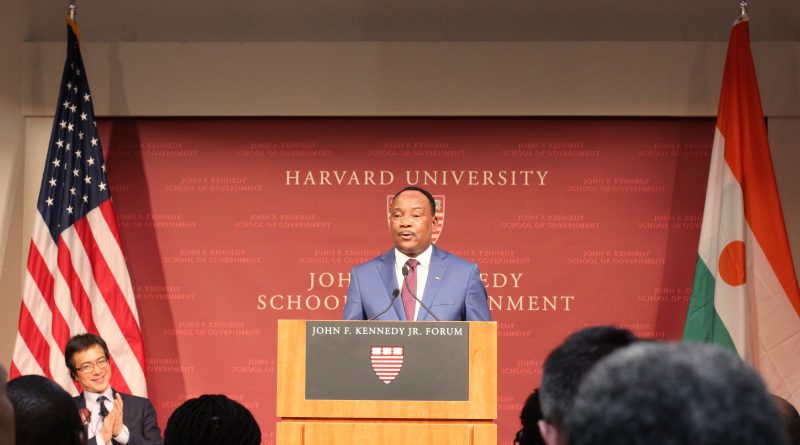 On April 3, 2015, as he came to Cambridge (Massachusetts, United States) to honor an invitation by the Institute of Politics of Harvard Kennedy School of Government to give the opening keynote address of the 6th annual African Development Conference at Harvard University, His Excellency Mr. Issoufou Mahamadou, President of the Republic of Niger, kindly accepted to hold an interview session with three Harvard student-led journals: Harvard Africa Policy Journal, Harvard Crimson, and Harvard Political Review. Below are edited transcripts of that interview. The audio interview can be listened to here.

Harvard Africa Policy Journal: Good afternoon Mr. President. Thank you very much for giving us this opportunity to speak with you. Our question is about the offensive against Boko Haram in western Africa. What have been the challenges in coordinating between Niger, Chad and Nigeria in raising this offensive against Boko Haram? And how have you been able to navigate these challenges to achieve a successful offensive?

To come back to your question about Boko Haram, we are organized, at the level of the Lake Chad basin countries, to fight that terror group, which was founded in Nigeria in the 2000’s and unfortunately goes beyond Nigeria’s frontiers to attack neighboring countries such as Chad, Cameroon, and Niger. We have set up a mix multinational military force to combat that terror group. This means that we are pooling together our means, our intelligence means, our operational means, to face the situation. And we are winning several successes against Boko Haram. For example, Niger’s armed forces, in relation with Chad’s, are leading an offensive within Nigeria and have liberated several Nigerian towns since the beginning of the offensive, which was launched on March 14.

Hence, we are on the right track and I think that Boko Haram has no future! We shall eventually defeat Boko Haram! It is true that we have faced some coordination problems, with Nigeria in particular, but we are progressively overcoming them.

Harvard Crimson: What do you think is key to overcoming Niger’s lack of infrastructure and limited access to education and creating the progress that could bring the country back to the world stage? What milestones have been passed since the start of your presidency in 2011?

President Issoufou Mahamadou: Thank you! Your question is related to the previous one on terrorism. We belong to the group of people who think that the solution to terrorism is military in the short run – But, in the long term, the actual solution is economic and social development as it on poverty that terrorism and organized crime develop.

So, what are we doing in Africa, and in Niger in particular, for socio-economic development? I, for example, am implementing since four years a program known as The Renaissance. This program is articulated around eight great priorities. The first priority is to reinforce the State institutions as the State must first exist; there must democratic and strong institutions. Your President, President Obama, said that Africa needed strong institutions, and not strong men. I agree with him, and we are working on that in Niger. Then, we must tackle security issues. One must acknowledge that security and democracy cannot be dissociated from development. Therefore, security, democracy and development form a triptych.

We are also developing a sector which is extremely important for an arid country such as Niger, which experiences major droughts turning into famines: It is the agricultural sector. We develop agriculture through our initiative 3N (Nigeriens Nourish Nigeriens). In four years, we have achieved remarkable results: First, we have attained MDG 1 (Millennium Development Goal Nº1), which consists in slashing by half the number of people affected by hunger. We have attained this goal thanks to Initiative 3N. Since my election four years ago, we have gone through three years of drought but those droughts did not turn into famines contrarily to what used to happen. Agriculture is then an extremely important sector on which we are working.

We are working as well on the education sector as we think, like many people do, that the human being is the most valuable capital. We have made schooling free and compulsory until age 16 years. Furthermore, we focus on vocational and technical training, and on the education of young girls. We develop higher education too.

There are other sectors which are part of our endeavors: Health, access of our populations to water, and the creation of jobs for the young.

We have a program [The Renaissance] for the development of all these sectors. But it is not sufficient. There must be a continental approach to the development of African countries, and we are coordinating our means to achieve that.

Harvard Political Review: Thank you for speaking with us today. We want to ask you to expend on your answer to the last question. Global warming is causing serious problems of drought and desertification for Niger. What is Niger doing to combat these problems, and how can Niger influence the rest of the world to halt global climate change?

President Issoufou Mahamadou: You are right to say that. The climate change is a major concern to us as it has very adverse effects on Niger. For instance, extreme weather phenomena may occur during the same year: During the same season, or even the same month, floods and droughts may happen – These are effects of climate change.

Here is another illustration: The climate change has led to the reduction of the area of Lake Chad. Lake Chad, which separates Niger, Chad and Cameroon, had an area of 25,000 square kilometers in 1960’s but, today, its area is down 2,500 square kilometers. Hence its area has been divided by 10.

Likewise, there are consequences of the climate change on Niger River, the only river that crosses Niger. This river is at risk of silting, and its ecosystems are endangered.

Hence, we feel effects of the climate change. But we are not accountable for. It is elsewhere that the planet has been polluted; it is elsewhere that countries emitted greenhouse gases. Now, those countries must pay. It is polluters who must pay. The next conference to be held in December in Paris (France) will enable us to find solutions to the climate change and to adopt measures so that the temperature of the planet does not increase by more than two degrees Celsius by the end of the century.