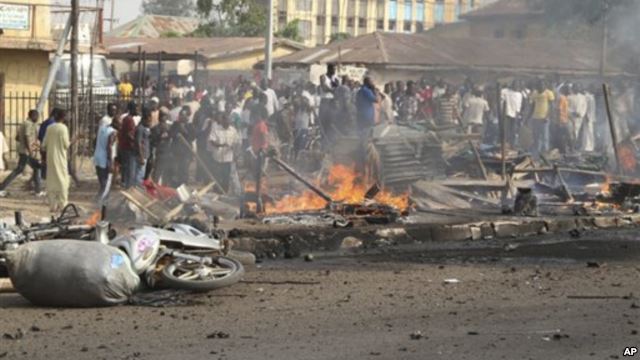 Thirty-five percent of women worldwide have experienced sexual violence in their lifetimes[1]. In Nigeria, domestic violence is pervasive across socioeconomic and cultural contexts. Forty-five percent of affected women suffer abuse from their current husband or partner[2]. According to a US Department of State Human Rights Report, the practice of domestic violence has “remained widespread and [is] often considered socially acceptable”[3].

Despite the prevalence of domestic violence in the country, the Nigerian government has held a permissive position toward the issue. The 2013 Nigeria Demographic and Health Survey revealed that most women do not seek help from anyone in domestic violence situations and that sexual violence often goes unreported. Seventy percent of the help-seeking women speak to their own families, while around thirty percent reach out to the family of their partner, and only two percent of women who report violence go to the police. Women experiencing domestic violence are often unwilling to go to the police for help because of their lack of trust in the police force[4]. Additionally the culture of abuse toward women permeates governmental and official spheres and thus contributes to the current lack of solutions for this problem.

The permissiveness toward sexual violence in the government and in society at large presents a large barrier to solving these issues. National legislation must be implemented; additionally between government officials, law enforcement officers, and the population, perceptions of women must change to ensure law enforcement and the abolition of domestic violence.

The Nigerian government has historically made inadequate responses to humanitarian matters. As an example, in 2014 the terrorist group Boko Haram kidnapped a group of schoolgirls in the Chibok village of northern Nigeria. However, the Jonathan administration did not give a public response to the abduction of more than 200 schoolgirls until the “#BringBackOurGirls” social media movement gained international traction. The Nigerian military has perceived the elimination of Boko Haram as daunting and does not present the training nor strategy required to effectively combat the extremist group [5],[6],[7]. Although the situation garnered public and international support and attention, the deficiency of political will in the Nigerian government has hindered a successful recovery mission to date[8].

Shifting the perspectives and priorities of the government appears as formidable as changing the general societal perspectives of women. However, this obstacle can realistically be surmounted by harnessing the desire of the Nigerian public and international community to tackle domestic violence. The Violence Against Persons (Prohibition) (VAPP) Act was passed earlier in 2015, marking a progression in the government’s attention toward domestic violence issues[9]. To prevent the government from appearing inconsistent, there must be repercussions in place for recalcitrant officers who fail to provide consistent, timely responses to abuse reports.

As President Buhari has been recently elected to office in 2015, he has pledged to take action against societal issues that previous administrations have failed to rectify, including corruption and Boko Haram. In conjunction with Buhari’s commitment to social and political reform, collaborative efforts to pressure the Buhari administration could be strategic in guiding the executive agenda. Specific members of the National Assembly could be pooled into a political coalition to call the government to action; similarly NGOs and international organizations could also collaborate with Assembly members[10]. However a syndicate will need to be created to work with Buhari since previous administrations have ignored the demands of single organizations, such as Women in Nigeria. The recommendations the group made concerning gender and equality were “trivialized, neglected or displaced by both the Political Bureau and Babangida government.”[11],[12]

The lack of action against domestic violence could be resolved by increasing the number of understanding women in politics, policy development, and law enforcement in Nigeria. Nigeria critically needs responsible leaders, many of whom could be women who choose to appreciate the societal complexities that contribute to the lack of domestic violence policies.

The difficulties preventing the creation of implementable domestic abuse policy in Nigeria originate from the sensitive nature of the topic. The discussion of private matters such as sex and marital relationships presents a taboo in Nigerian culture. Defying a traditional societal role is also considered to be a societal transgression. The lack of discussion of domestic issues creates a space in which an ostensibly socially unacceptable behavior becomes allowable and even commonplace. Because conversations about domestic violence are off limits, many women do not share abuse incidents with anyone. The stigma renders women’s accounts of their experiences infrequent and perceivably untenable.

The taboo surrounding domestic violence prevents discussion and accurate data reporting. To resolve the tensions caused by this problem in Nigerian society, it will be necessary to remove the stigma around domestic violence. This can practically be achieved through the creation of government-sponsored community programs that directly address physical and psychological violence. The programs could be held in shelters, since Nigeria currently has two shelters for women suffering from domestic abuse[13]. The government must prioritize the protection of victims as detailed in the VAPP bill. These programs could be set up across the country in proportion to population density. Well-recognized NGOs could facilitate partnerships between the government of Nigeria and international organizations such as the World Bank, Gates Foundation, and the United Nations. Such partnerships would facilitate project funding and increase government accountability.

While taboos certainly hinder women from discussing and reporting abuse, the existing social structures in Nigeria prevent women’s stories from being heard. One such social structure is the disparate status between men and women, as men have higher status in Nigerian society. Nigerian women typically hold jobs that require arduous labor, work longer hours, and have lower levels of educational attainment than men. Nigerian women are also responsible for maintenance of both the family and the workplace[14].

Furthermore, the Nigerian penal code, enforced mainly in Northern Nigeria, includes provisions for wife beating in cases when a husband is disciplining his wife[15]. The difference in status between men and women is also evident in the Nigeria Criminal Code Act of 1990. The code indicates that an assault against a male is charged as a felony while an assault against a woman or a girl constitutes a misdemeanor[16]. According to the former Nigerian Minister for Women’s Affairs, “’[i]t is like it is a normal thing for women to be treated by their husbands as punching bags.’”[17]The societal perception of women thus presents a large hurdle to overcome to address the deeply entrenched problem of domestic violence in Nigeria.

To overcome the barriers preventing societal reform, it will be necessary to enable women to break out of traditionally engrained gender roles and expectations. With an increased sense of status, Nigerian women will no longer be bound to expected roles acquiescence. Given a voice, women will be able to challenge the established differences in status between men and women.

Female empowerment can be increased through the expansion of education opportunities for women. NGOs could work with the Nigerian ministry to increase female enrollment. Additionally, women’s empowerment organizations such as the Nike Foundation’s Girl Effect can work with schools to create mentorship programs to teach secondary school girls about various industries. Increased opportunities in education will enable women to attain higher positions in the work force.

Leveling the differing statuses in Nigerian society can be accomplished by the introduction of a corporate social responsibility initiative in which the government would subsidize regular workplace curricula instructed by consulting firms or NGOs to educate employers and employees about female equality. Additionally, the program would provide a separate space for women to discuss the issue of sexual violence.

Finally, to increase government accountability and transparency, the penal code can be revised to repeal existing allowances of domestic abuse to match the VAPP Act. Working with Nigerian media outlets such as The Punch newspaper and TV Continental broadcasting, the process of the legislative revisions can be publicized so that the Nigerian public understands the commitment of its government to addressing this issue.

[1] This essay has been modified from a paper originally submitted on December 8, 2015 as a final paper for the Harvard University course Global Health and Health Policy 60: Negotiation and Conflict Management: From the Interpersonal to the International. The purpose of the paper was to apply course concepts and frameworks to an international conflict implicating issues of identity.

[12] Pereira, Charmaine. Chapter 6: National Council of Women’s Societies and the State, 1985-1993: The Use of Discourses of Womanhood by the NCWS. Identity Transformation and Identity Politics Under Structural Adjustment in Nigeria. Ed. Attahiru Jega. Stockholm: Elanders Gotab, 2000. 109-133. Google Books. 10 Dec. 2015.