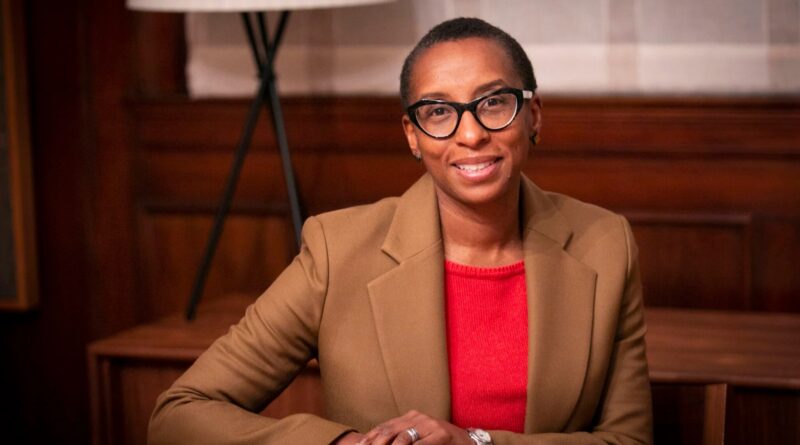 “Claudine is a remarkable leader who is profoundly devoted to sustaining and enhancing Harvard’s academic excellence, to championing both the value and the values of higher education and research, to expanding opportunity, and to strengthening Harvard as a fount of ideas and a force for good in the world. As the Edgerley Family Dean of the Faculty of Arts and Sciences since 2018, and previously as Dean of Social Science, Claudine has brought to her roles a rare blend of incisiveness and inclusiveness, intellectual range and strategic savvy, institutional ambition and personal humility, a respect for enduring ideals and a talent for catalyzing change. She has a bedrock commitment to free inquiry and expression, as well as a deep appreciation for the diverse voices and views that are the lifeblood of a university community.

“As her many admirers know, Claudine consults widely; she listens attentively; she thinks rigorously and imaginatively; she invites collaboration and resists complacency; and she acts with conviction and purpose. She has been an energetic and forward-looking leader of Harvard’s largest faculty – spanning the biological and physical sciences and engineering, the social sciences, and the humanities and arts. All of us on the search committee are excited by the prospect of her bringing her high aspirations and interdisciplinary outlook across the Yard from University Hall to Massachusetts Hall. We are confident Claudine will be a thoughtful, principled, and inspiring president for all of Harvard, dedicated to helping each of our individual schools thrive, as well as fostering creative connections among them. She is someone intent on affirming the power of curiosity-driven learning and is eager to integrate and elevate Harvard’s efforts – throughout the arts and sciences and across the professions – to address complex challenges in the wider world,” the Chair of the search stated.

She was additionally appointed as a professor of African and African American Studies in 2008, after which she was named the Wilbur A. Cowett Professor of Government in 2015.

“Claudine’s own scholarship and teaching have focused on aspects of democracy – political participation, voting behavior, public opinion, and the interplay of race, ethnicity, and politics in America. Among other recent roles, she has been the founding director of Harvard’s Inequality in America Initiative – a multidisciplinary effort to energize Harvard’s teaching and research on social and economic inequality, and to inform public debate and policy options related to inequality in education, health, employment, economic status, politics, and other domains. A member of the American Academy of Arts and Sciences, she has pursued her scholarship as a fellow at the Public Policy Institute of California, Stanford University, the Center for Advanced Study in the Behavioral Sciences, and the Radcliffe Institute for Advanced Study at Harvard. She has also served on the boards of the American Academy of Political and Social Science, the Pew Research Center, and Phillips Exeter Academy (which she attended before college), as well as the Association of American Universities’ advisory board on racial equity in higher education,” stated Pritzker

“I want to thank especially the members of the three advisory groups formed to gather additional community-wide input and to offer their own diverse perspectives to the search committee. The members of these three groups – faculty, students, and staff – invested extraordinary time and effort in reaching out to colleagues across the university, and their work produced a range of insights vital to the search committee’s deliberations. I personally have learned a great deal from their work, and all of us on the search committee are very grateful for their commitment. That gratitude extends to the hundreds of people who, in one way or another, offered their thoughts on the search. Your observations not only helped inform our selection of the new president; they also produced a wealth of valuable perspectives on the university’s perceived strengths and shortcomings, and on people’s hopes for Harvard as it approaches its fifth century.

“I would not want to end this message without again thanking Larry Bacow for his outstanding service as he looks toward his final six months as our president. His wisdom, judgment, foresight, experience, humility, and values have served Harvard and higher education extraordinarily well during these challenging times, and all of us are deeply in his debt. I know he looks forward to a productive home stretch this spring, and we will have more opportunities to recognize and celebrate his leadership in the months to come.” Pritzker concluded.