Home > Interviews > Interview: Six questions with Presidential Candidate Martin Fayulu, on the importance of democracy in the Democratic Republic of Congo 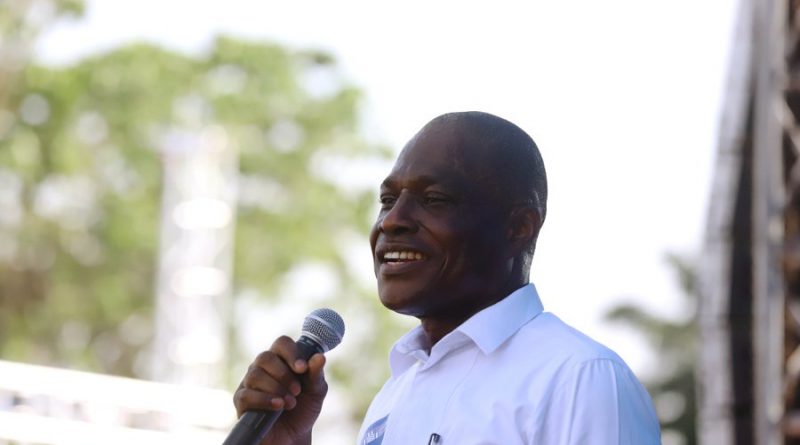 Recent developments in Ukraine allude to a potentially major shift in geopolitics. The post-cold war order that tilted the balance of power in favor of the West – and ushered in an era of democratic advances throughout the world – appears to be at a standstill. Experts and policymakers point to the growing influence of authoritarian powers like China and Russia to make this point. Few have been willing to address what is perceived by some as a lack of sincerity in America’s democracy promotion agenda. The Democratic Republic of Congo (DRC) provides one example.

Martin Fayulu, leader of the Engagement for Citizenship and Development in the Democratic Republic of Congo, spoke with MIT Legatum Fellow Milain Fayulu about what he sees as the core concerns for DRC’s democracy in relation to democratic norms espoused by the United States, for the Africa Policy Journal.

Q: The State Department’s final statement on the 2018 election in the DRC noted that it was “a peaceful transfer of power,” yet the DRC has faced ongoing conflict for decades. What do you make of this assessment?

This statement implies that “peaceful” is good enough for Congolese people in the process of transferring power. This is the prejudice of low expectations, and it is unacceptable – in the DRC, and elsewhere on the African continent. The formulation, which the State Department carefully used to circumvent the real issues, deprived the Congolese people of agency and their sovereign right to choose their own leader. The history of American foreign policy is unfortunately replete with examples of putting a premium on hypothetical stability at the expense of the will of the people. Taking this approach inevitably creates more problems down the road, and it plants the seeds of future conflict. It’s important to learn from the past and to stop repeating this same deadly mistake.

Q: What were some of the factors you feel are responsible for the eventual decision around the 2018 election? What would you want to see done differently?

There were many negative external factors but the U.S. position arguably tipped the scale. Internally, there is a gap between our people’s yearning for democracy, as demonstrated by their enthusiasm during election cycles, and the gatekeepers of power — this includes most notably the electoral commission and the Constitutional Court. There is a mismatch between the demand for democracy and its supply. In effect, we are in the presence of a market failure that requires intervention on the supply side and its drivers. That is why I have proposed a roundtable between stakeholders, to be mediated by the Catholic Church, ahead of the 2023  election. The Catholic Church is respected by huge majorities of the people and it is seen as an apolitical institution that operates in good faith and above politics. But convincing the current government will not be enough. We will need strong guarantees, including commitments to impartial election monitoring, the real-time publication of disaggregated results, the ability of opposition candidates like myself to speak and campaign freely, as well as the protection of civil liberties and political rights of our people. We are not asking for much – just an equal playing field in which human rights are respected. Think of this as a regulatory intervention, a much needed one if our country is to have any hope of a credible electoral process.

Q: A diversity of actors came forward to publicly denounce the results of the 2018 election. The African Union, the Catholic Church, some officials within the US State Department, and a major report published by the Financial Times applied pressure to hold authorities accountable. Where does the DRC stand today, in your opinion?

Well, the Pope is on his way to DRC, the King of Belgium is also expected to visit, and the United States seems more concerned about the country’s cobalt supply chain than about democracy. So far, there has been a perplexing failure to respect how these issues are inherently linked. They are not mutually exclusive issues. We need to point to relevant indicators and show that despite attempts to legitimize an unpopular regime, the Congolese people are suffering. It’s time for competence and meritocracy. It’s in the best interest of the United States, and the world at large, to have a functioning and well-managed DRC.

Q: The DRC, when mentioned in the media, is often discussed in the context of the green revolution. Commentators are connecting the dots between electric vehicles, batteries, and the strategic importance of cobalt. What do you make of this media interest and how do you think the country can connect this endowment to good governance?

The DRC supplies about 64% of the world’s cobalt output. This is hugely important. But the media coverage frames the conversation against the backdrop of the US vs. China rivalry. There is little exploration or attention on governance, social impact, and the ecological consequences of mining. The main focus should be first and foremost the agency of the Congolese people. Cobalt – and natural resources in general – could be a blessing or a curse in DRC. It depends on good, democratic governance and whether the value chain benefits the few or the many. Currently, we are not on the right track. Our political elite, and those with political connections, have definitely benefited. But ask the average Congolese citizen what benefits they have seen or experienced. They are few and far between. The environment of good governance so far remains lacking. Only when we are able to make this connection will our country, and our people, truly be empowered by and benefit from our country’s resources.

Q: In his first State of the Union address, President Joe Biden claimed “In the battle between democracy and autocracy, democracies are rising to the moment, and the world is clearly choosing the side of peace and security.” Is this true in the DRC?

In general, the Congolese people feel like they have been short-changed by the international community and the West in particular. Too often, western leaders espouse democratic principles, but often fail to live up to them. Congolese have embraced democracy, but at every turn we saw the very same people who purport to promote democracy support undemocratic outcomes. Meanwhile, our country is still not at peace. We have over 5 million internally displaced people and by some accounts, over 6 million people have died over the last two decades because of civil conflict. Furthermore, one-in-three people suffer from hunger – the worst food crisis in the world in absolute terms.  So I am not sure there is a clear understanding in people’s minds right now about what exactly is the “side of peace and security” President Biden is referring to.

At the same time, there is a real opportunity for the Biden administration. In an era in which people are losing faith in democracy worldwide, Africans writ large continue to support it while also rejecting dictatorship or military rule. Survey after survey shows this. And this is because Africans, and Congolese have experienced the sort of violent repression and underdevelopment that come as a result of anti-democratic rule. We have been there, we have done that, and we do not want to go backward. We want to move forward, and to finally reap the benefits of democratic rule that have so far been denied.

Q: In 2019 you gave the final keynote address at the Africa Development Conference of the Harvard Kennedy School. What advice can you give young people studying public policy?

The fate and strength of a country’s democratic foundations must be built on strong citizen engagement. Because democracy isn’t simply about leaders, but most importantly, it’s about the people — ordinary citizens standing up for and safeguarding their rights in the present and for future generations. You ought to be exemplary citizens and always seek justice and truth whether in the DRC, in the United States or elsewhere in the world. This is what binds us as humans. Ultimately, democracy in the West and Africa aren’t mutually exclusive issues, but instead, inherently linked.

About the interviewer: Milain Fayulu is an SM candidate at the MIT Department of Political Science specializing in International Relations. Prior to joining the MIT community Milain founded Eben Naturals, a skincare brand focused on the POC market; Flashstay, a property tech solution; Congo Clothing Company, a fashion advocacy label in tandem with 2018 Nobel Peace Prize Laureate Dr. Denis Mukwege’s Panzi Hospital; and Intelcongo.com, a digital platform providing expert level analysis and opinions on a range of topics pertaining to his native Democratic Republic of Congo. Milain graduated from the University of Miami with a bachelor in Economics and is a Legatum fellow at MIT. He is Martin Fayulu’s son.

One thought on “Interview: Six questions with Presidential Candidate Martin Fayulu, on the importance of democracy in the Democratic Republic of Congo”