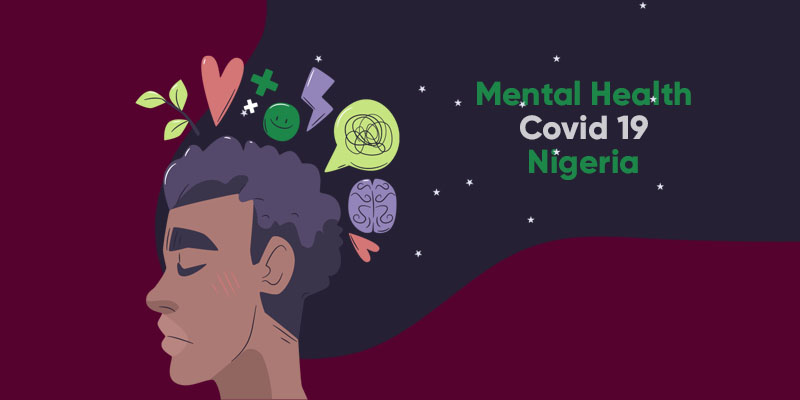 Officials tackling the coronavirus pandemic in Nigeria have recognized the impact of COVID-19 on citizens’ mental health. In June, Nigeria’s Chairman of the Presidential Taskforce on COVID-19, Boss Mustapha, noted that stigmatization and mental health were among the greatest challenges to the national response. The Nigeria Centre for Disease Control (NCDC) Director-General echoed this notion, stating that stigma and its effects on mental well-being were impacting potential contacts of COVID-19 from reporting themselves for tests. This rising stigmatization helps fuel spread of the disease and worsens the mental health of infected and affected populations, as was the case with other outbreaks like the 2003 SARS epidemic. These sentiments are welcome and represent an evolution from the beginning of pandemic preparedness when psychological distress was not elevated as a significant issue confronting epidemiological response.

However, public prioritization has not translated to policy reform that would bolster Nigeria’s mental health infrastructure in the wake of a pandemic that is still raging. On December 12, Nigeria registered 796 new infections, its highest single-day total of COVID-19 cases since the beginning of an outbreak that continues to leave Nigerians psychologically vulnerable as they confront the reality of a second wave. Presently, the mental health field is governed by the Lunacy Act of 1958, legislation that dates back to Nigeria’s colonial era. To date, no democratically elected civilian administration has enacted a law focused on protecting mental health.

The National Assembly is currently reviewing new mental health legislation. This provides a rare opportunity to strengthen the capacity and regulatory environment for those who experience mental health distress in the wake of COVID-19. Late last year, in October, Senator Ibrahim Oloriegbe, Chair of the Senate Committee on Health, introduced the Mental Health and Substance Abuse Bill 2019. November saw the Senate pass it for second reading. Progress continued on the mental health bill this February when the upper chamber held a public hearing on the proposed law.

To ensure the bill guarantees quality care and does not perpetuate stigmatization of mental health, a number of amendments should be made so it adequately supports public health emergencies and persons with disabilities (PWDs). It is also critical the law is reformed to uphold international accords Nigeria has acceded to. In 2018, at the Global Disabilities Summit, the government made a commitment to the world that it would recognize the equal rights of PWDs, which included persons with mental health conditions and psychosocial disabilities. Nigeria also ratified the United Nations Convention on the Rights of People with Disabilities (UN CRPD) in 2007 and its Optional Protocol in 2010, affirming the full inclusion and participation of people with psychosocial and intellectual disabilities.

There are several components of the proposed legislation that fail to meet these ideals and can be improved. For instance:

A person with mental and substance use disorder has the right to enjoy a decent life as normal and as full as possible which includes, the right to education, vocational training, leisure, recreational activities, full employment and participation in civil, economic, social, cultural and political activities and any specific limitations on these rights shall be in accordance with an assessment of capacity.

Other areas of the bill limit the right to property, for instance, Part VII, Section 46, Clause 1:

The provisions of this part shall apply in respect of a person, who in the considered opinion of a High Court Judge based on competent medical evidence is incapable by reason of mental disorder of managing and administering his property and affairs; and a person whom the Judge is satisfied to refer to as a patient for purpose of this Part of this Act.

(1) The judge may, with respect to the property and affairs of a patient, door secure the doing of all such things as to him appear necessary or expedient in respect to property:

These stipulations allow for a restriction of human rights on the “basis of assessment of capacity.” Instead, the law should permit PWDs to have ‘supported decision-making’ through formal or informal methods that allow them to make critical decisions related to medical treatment, property, and other areas important to their lives. Article 12 of the UN CRPD instructs State parties to take appropriate measures to provide access to the support PWDs may require in exercising their legal capacity.

(a) Has inflicted, or threatened or attempted to inflict, or unless

admitted is likely to inflict physical harm on himself or another; or

(b) Is in need of treatment for mental disorder and by reason of the illness, his judgment has been impaired that the person is incapable of appreciating his need for such treatment and of making any rational decision in regard there to.

Statues like this perpetuate a misinformed narrative that people with mental health conditions need to be “detained” to protect the community.  Other areas of the bill (Part V: Sections 29, Clause 6 & Sections 37, Clause 2) allow for involuntary admission of anywhere from 72 hours to 1 month purely on suspicion of having a mental health condition. Nigeria’s promise to guarantee the rights for PWDs on an equal basis means committing that “the existence of a disability shall in no case justify a deprivation of liberty,” as stated in Article 14 of the UN CPRD.  Individuals should only be detained if they engage in behavior that would constitute a legitimate cause for detention for everyone else.

… moneys of the Fund shall be applied for:

(a) the skills training of persons with mental disorders;

(c) the construction of facilities for persons with mental disorders; and

The bill does not specify the nature of the facilities or criteria in which they will be constructed. The legislation should be revised to ensure the Fund focuses on the quality of existing institutions, review of curriculum and proper training of practitioners aligned with international standards, and encouraging local municipalities to support the mainstreaming of psychological care in primary health services. Both Uganda and South Africa’s mental health laws promote a community-oriented approach and can be inspirations to draw upon.

Nigeria’s own National Policy on Mental Health Device Delivery 2013 also advances this globally recognized best practice. It emphasizes the development of community-based services for persons with mental health conditions, but the issue has been putting this prescription into practice. A few states in the country have made modest progress in this regard. For example, the HAPPINESS project uses locally adapted World Health Organization (WHO) tools to train primary care workers in rural communities in Imo State, Nigeria, on screening, assessing, and managing the mental health of patients. Initiatives like this can serve as a model for other states integrating psychological care in general hospital settings when this legislation is implemented.

The National Mental Health Action Committee of Nigeria’s Federal Ministry of Health represents one focal point that engages a diverse set of stakeholders on mental health advocacy. Last year, the Committee, with the support of  WHO, reviewed the proposed mental health legislation and revised it to respond to the demographics’ needs better. Their revised version was not used because policymakers did not want to reengage parliamentarians on a different draft of the bill early in the legislative process. If this mental health law is to succeed, then concerns of the constituents that will implement it — like this Committee and the Ministry of Health — must be incorporated.

Integrating these suggestions into the proposed bill will help Nigeria become a leader in protecting those with mental health conditions and aid it in joining the ranks of South Africa (2002) and Ghana (2012), who have recently updated their regulations and have the most progressive legislation in Africa.  Since the National Assembly is currently reforming the law as it reviews submissions from the public hearing, now is the perfect time to adopt these recommendations to ensure the law enshrines a rights-based approach to mental health. Passing this legislation is critical — at stake is not just the well-being of our society’s most vulnerable, but also our ability to mitigate the impact of COVID-19.

Chime Asonye is a lawyer and founder of the online community, Nigerian Mental Health. Hauwa Ojeifo is the founder of She Writes Woman, an organization supporting mental health awareness in Nigeria.

By Chime Asonye and Hauwa Ojeifo