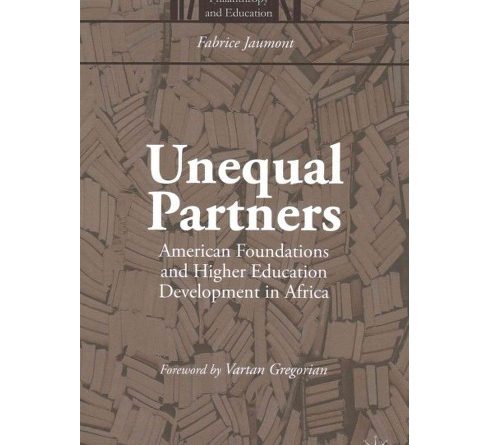 In Unequal Partners: American Foundations and Higher Education Development in Africa, Fabrice Jaumont focuses on American private foundation efforts since 2000 to invigorate the interest of governments and policymakers in higher education and its networks throughout Africa.[i] Reflecting this renewed interest, the primary subject of this work is the Partnership for Higher Education in Africa (PHEA), which began in 2000 as an informal pursuit by presidents of Carnegie Corporation of New York, Ford Foundation, John D. and Catherine T. MacArthur Foundation, and The Rockfeller Foundation with subsequent addition of The William and Flora Hewitt Foundation, The Andrew W. Mellon Foundation, and The Kresge Foundation. Its origins stemmed from a desire to elevate specifically higher, rather than primary, education. Pooling their reputations and willingness to focus on Sub-Saharan Africa’s higher education landscape, the Partnership maximized achievement, while subsequently enhancing each participating foundation. Nine countries, including Egypt, Ghana, Kenya, Madagascar, Mozambique, Nigeria, South Africa, Tanzania, and Uganda, benefited until termination in 2010.

Jaumont zeroes in on institutional aspects, rather than applying the hegemonic lens noted as frequently used to look at United States foundation work abroad, bringing the relational aspects of philanthropy to the forefront throughout the book’s three parts. Following a Foreward by Carnegie Corporation of New York President Vartan Gregorian, Jaumont’s first section assesses the “ecology” of United States foundations specifically working in Africa, situating the interplay of higher education and philanthropy historically. What emerges is a philanthropic environment in Africa, that was in 2000, riddled with inconsistencies and lack of collaboration. This helped set the stage for the founding of the PHEA. In light of empirical data demonstrating American foundations’ preference for working in current or former Commonwealth countries with English as the primary language, Jaumont touches briefly on the geopolitical and economic potential for the United States of these connections before returning to his institutional focus.

The book’s second section begins by framing philanthropic foundations as institutions underpinned by very human interactions and sets the stage for the question of legitimacy considered in the book’s third part. His institutional focus allows the relationships of philanthropic endeavors to emerge, and Jaumont focuses on the PHEA’s ability to operate using a “competitive-collaborative approach” while simultaneously maintaining, and actually buoying, individual reputations and the individuality of each participating foundation (46). Thus, individual foundations were themselves strengthened by knowledge transfer resulting from the Partnership approach, leading to more efficiency and better risk management across the individual foundations themselves. Collaboration of the PHEA was visible in its ability to reach agreement on strategies through consultation, as with the “joint initiatives” funding mechanism (62), while individuality could be maintained as each participating foundation continued to make grants as each saw fit, the funding mechanism most common.

Jaumont presents the close links between leadership and ownership in the particular situation of the PHEA. Perhaps not unexpectedly for an entity which began as a presidential initiative, he portrays the tremendous influence of individual foundation presidents on the Partnership, producing frequent challenges to joint work being pursued by the PHEA’s own program officers, directors, and grantees. The termination of the PHEA in 2010 aligned with a number of leadership changes across participating foundations.

The third section of the book looks at the issue of legitimacy, defined for the reader as “foundations’ ability to serve the needs and interests of universities and higher education organizations” through “exchange” among them (82). In this section, he distills the analysis of the PHEA to “a virtuous circle of serving and being served” (93), while being simultaneously situated within an internal and transverse organizational setting possessing its own dynamics. Foundational motivation is noted to have arisen from institutional, environmental, and actor-based elements (83). Environmental elements, important considerations for policymakers, are particularly highlighted as the PHEA was working on a continent where resources were frequently lacking and governments were not always willing partners. In its efforts to address institutional development and capacity-building, environmental elements repeatedly asserted themselves.

This discussion of capacity-building throughout the chapters emerges as remarkable as Jaumont frequently refers to its function as a “ceremonial rite” (103, 130, 131) and “myth” (101, 103, 131) as well as its presence in discourse as a “buzz word” (131) and form of “rhetoric” (103, 131). On this subject, the author clearly desires to distinguish his way of thinking from that of neo-institutionalists, declaring the PHEA’s preoccupation with capacity-building above all else as stemming from “charismatic” foundational leadership and not the “societal situation prevailing at the time of … inception” (133), a rationale neo-institutionalists would be inclined to offer. Neo-institutionalists would be reasonable in doing so, for, as Deborah Eade pointed out, capacity-building was to the 1990s, just before founding of the PHEA, what scaling-up was in the 1980s.[ii] Jaumont, however, seems skeptical of the concept so widely referenced across the philanthropic and non-profit sector everywhere, possibly the reason he repeatedly praises the PHEA’s work in the more tangible Bandwidth Initiative, with its more measurable outcomes and concrete results. This skepticism is interesting from a policymaking perspective as it raises important issues: Who is assessing capacities already present on the ground? Who is assessing what capacities are needed going forward? How is successful capacity-building, should that be the focus, defined?

As a resource, the book offers more case study than practical recommendation, although it is a case study of a remarkable endeavor. Jaumont offers numerous ways, here and there, that the distance between the PHEA grantors and grantees was offset during the PHEA’s duration, including through direct involvement by Africans themselves, establishment of field offices by certain participating foundations, and careful consideration of the timing of announcements. Notably, despite the book’s focus on institutional dynamics and relationships, the unequal nature of partnership between American foundations and the African higher education sector seen with the PHEA still emerges, just as it does through application of a more hegemonic lens.

This article is re-published from the 2018 Africa Policy Journal. The author is Elizabeth Bruce of Wolframs-Eschenbach, Germany.